My previous match preview was for the game against Cowdenbeath at Central Park. Here we are a month later and it is déjà vu all over again. The clash with the Blue Brazil is preceded by 2 Cup games and yet again there is boardroom upheaval. We are drowning in bad news and discontent, deservedly, is running high. I opened the last one remarking that the game against Cowdenbeath was probably not what you were thinking about, and now it is the same, again. Still, here goes...

In the last review I said that I was born in Cowdenbeath, leaving there for the Glasgow area when I was five. So, my parents spent the beginning of their married life, and had their children, in Cowdenbeath. My mother though was from Hill o’ Beath. This was a huge distance away, all of 1.7 miles. This was more than enough for my father to refer to her as a ‘stranger’ in Cowdenbeath, an ‘outsider’. Such local bickering was always ended with the reminder that a certain James Curran Baxter also hailed from Hill o’ Beath. 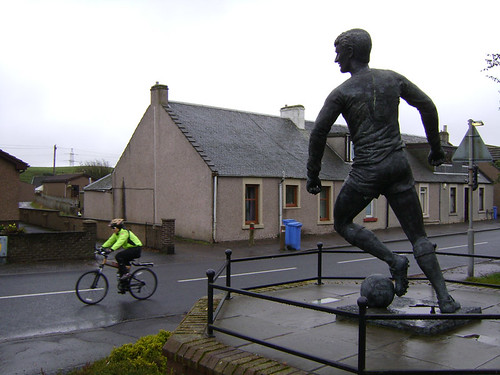 As you would imagine, Cowdenbeath’s record at Ibrox is pretty much a list of defeats, often heavy. There is, however, a warning hidden in there - an exception to this litany of Rangers’ success. On Saturday 17th 1949, Cowdenbeath pulled off a result that was in some ways more of an upset than our 1967 catastrophe at Berwick. Cowden won 3-2. Now, I say ‘bigger than Berwick’ given that 3-2 is more shocking than 1-0 and that it was at Ibrox, not a home cup tie for the underdogs. To put it in perspective, we met Cowdenbeath in the Scottish Cup that season at Ibrox and we won 8-0. Yet, it is hardly remembered. It should be, it was the first time Rangers had lost to a team from a lower league. The reason it is not recalled with images of seismic shock is that it was the first of a two-legged affair. If it been a one-off game, it would have been a sensation that was ‘off the scale’; but what saved it from being so was the 2nd leg, which it was presumed Rangers would win handsomely.

The drama was far from over, however. The largest crowd there had ever been at Central Park saw Cowdenbeath lead 1-0 at half-time, 4-2 on aggregate. Rangers, with a horror of an embarrassment looming, threw everything at the Fifers in the second half. They were speedily rewarded with a Sammy Cox goal on 50 minutes. Surely now, the goals would flow for the giants of the Scottish game? The ‘Gers fans sat back to await further strikes. And waited, and waited and waited. Still the Fifers held on to their lead. 80 minutes passed, then 85, then 89. With mere seconds left George Young launched the ball high into the Cowdenbeath box and Rutherford scored for the Rangers. Away goals did not count double. Rangers had scraped into extra time where Cox scored again to put Rangers through 5-4 on aggregate.

All that drama was before my time. The first time I saw my hometown team play at Ibrox was the day of Derek Johnstone’s debut. It must be strange for younger bears to hear of DJ as a Rangers’ legend, but he became that. He was a wonderful striker and possibly an even better defender. Playing from the back I saw him nutmeg an Ajax star in their wonder team and set off up the pitch, almost scoring at the end of a move he’d started in our own defence. That was Derek Johnstone in the days when he was known as a very fine Rangers player rather than a dullard of ‘journalism’ and a buffoon behind a microphone.

Ah, memories – anyway, he made his debut for Rangers against Cowdenbeath in a 5-0 win in September 1970. His performance that day played a big part in him being chosen face Celtic in the League Cup Final. Rangers had again played Cowdenbeath in the semi final, progressing with a 2-0 win two weeks after drawing 1-1 with the mighty Bayern in the Fairs Cup. Celtic meanwhile awaited us in the final, having squeezed past Dumbarton, by 4-3 in a replay, two days earlier, in their semi final.

The final was expected to be a walkover for the all conquering Celtic side of the time, despite their semi final struggle against the might of the sons of the Rock. This was the way of things then and especially so for that game as John Greig, our heartbeat, was missing. I was playing for the BB that day, and spent the game in my wannabe Willie Henderson role, but hugging the touchline even more than normal as a friend on the sidelines was relaying news from the game to me.

The boy blooded at Ibrox v Cowdenbeath rose, in all senses, to the occasion and won us the cup on a very famous day in front of over 106,000 at Hampden. His name was legendary to Bears around the globe already and I always remember that he started his first team career against Cowdenbeath at Ibrox.

Some twenty years later there was another 5-0 win for Rangers over the Blue Brazil, this time in the Scottish Cup:

The contrast between us now and then is hard to bear. Ally was an unquestioned hero, a happy big crowd of bears were in a well maintained stadium. Woods, Gough, Hateley, Walters, Trevor Steven – hell, there was even a Scot Nisbet goal! You hear Souness in interview after you see what a special occasion it was in those days for Cowdenbeath to come to Ibrox. They were happy even after being gubbed. How times have changed.

Our recent form, going back six games, starts with a 3-0 win v, yes, Cowdenbeath. This was followed by a 4-0 win against Falkirk and then, disastrously on a day when we could have put pressure on Hearts, we had a second draw of the season with Alloa (this was before we started losing to them). Ally said we’d ‘fight hard’ to recover from this setback. . That was followed by defeat at Tynecastle and widespread speculation over Ally’s future. Ally said we’d ‘fight even harder’ from then on. A convincing victory over a diabolical Kilmarnock (our third win over a top flight team this season) raised hopes but, as is ever the way nowadays, these were to be cruelly dashed.

On December 3rd, an Alloa team, with 9 missing players and a collection of part-timers who’d just about made it to the ground in time through the evening traffic after their day jobs, came from 0-2 down to win 3-2 in a second half that was ‘a game of two halves’ all on its own. The first half of the match as a whole had been so bad that I cleaned a cat litter box in a desperate attempt to distract my eyes from the TV. It speaks volumes that I was disappointed when there was nothing left to clean in the tray. After this latest humiliation, in his astounding record of embarrassing cup losses, Ally said that we’d ‘fight tooth and nail’ to recover from it. To be brutally honest, to be absolutely truthful with you – gie’s a break, Ally, we’ve heard it all so many times before and, in any case, the word ‘fight’ is ludicrously inapt.

As you’d expect Cowdenbeath’s away record in the league is dire, though they were desperately unlucky to lose at Hibs and they did win at........yes, you guessed it, Alloa. And, yes, you guessed right again, by 3-2 of all scorelines.  With MacLeod injured and Wallace and Smith available after injury and suspension respectively, I can see Wallace at left back and Smith in midfield.

Whether Ally reverts to the centre back line-up that didn't lose goals or sticks with the new one that has shipped them ever since the bomb-scare returned is one question. Another is whether the pressure Ally is now under may make him throw off his crippling negativity and see him freshen things up. Perhaps a young player will start an illustrious career with us in this fixture against Cowdenbeath. Only time can tell, though I’d be willing to have a wager on the answers.